The John A Overby Scholarship Fund

The John Overby Scholarship Fund was established in 1999 by David Wilson, as part of the 50th Anniversary celebration of the founding of Short Sugar’s. John Overby created and perfected the recipe for Short Sugar’s famous Barbecue Sauce, a product that remains unchanged since 1949.

Scholarships are available to students attending Rockingham Community College, with a preference for current and past employees of Short Sugar’s and their families. 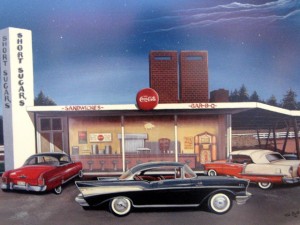 Recipients must be enrolled in at least 6 credit hours in a program that leads to a degree or diploma. They must maintain a 2.75 GPA and should be active in other school or community events. Financial needs are considered in the application process. Scholarships may be renewed for a second year as long as the GPA is maintained.

The scholarships are funded through the sales of the Short Sugar’s 1960 Lithograph prints by Tom Butler of Madison, NC. Only six hundred full-sized lithographs were printed. In addition to the prints, fifty Artist’s Proofs were created. All of these are signed and numbered by the artist.

You may purchase one of these prints either by dropping by the restaurant on South Scales Street, or you may order online on our website. Click HERE to order online.

Back before 1949, John, Clyde, and Eldridge Overby owned a quick-stop store/grill on South Scales Street in Reidsville, NC. By 1949, the Overby brothers had decided to focus on the restaurant business and built the original Short Sugar’s Drive-In just a few hundred feet from where the original store had been.

Just before the grand opening of the new restaurant, we lost Eldridge in a fatal car crash. John and Clyde went on to open the new place, and in honor of their brother Eldridge, they called it Short Sugar’s, using the nickname so many had come to know.